When I give new beekeepers advice, I always recommend starting two hives if they are able. I’m really glad I followed my own advice this year because one hive is doing really well and the jury is still out on the other.

I installed both hives the afternoon of May 9th, 2020. I checked both hives on Thursday May 14th to see if the queens had been released. In one hive, the queen who will henceforth be named Queen Quarantine, was released and I refilled the feeder.

The second hive the queen had not be released and was dead in the cage.

I was able to get a new Queen the following Monday the 18th and got her installed. I’m going to call her Queen Calamity.

Queen Calamity’s hive is limping along. The good news is she was released and I found her in the hive. They had not drawn out a lot of comb probably due to being queenless for extended period of time. I did see eggs and some very young larvae which is consistent with a queen only being in the hive a short time. I also saw a few cells that had multiple eggs which is a sign of laying workers. Typically it is hard to come back once you get into a laying worker situation, but I’m going to give it a few days to give the new queen a chance. I also had emptied the feed and refilled since it had been in there for an extended time and I didn’t want it to start fermenting.

Next week’s inspection will be important. If Calamity’s hive is still lacking drawn comb and brood, I will most likely need to bite the bullet and combine with Quarantine to cut my losses. If it looks like she is turning it around, we will give her a chance and perhaps I will supplement with a frame from Quarantine to jump start brood production.

Don’t call it a comeback…

So 2019 didn’t happen with starting my hives again. The house we were building wasn’t quite ready yet especially the area where the hives would go. So I had to punt on 2019 and wait until 2020, and I wasn’t going to let a little something like a global pandemic stop me. If you are interested in the house we built, you can head over to my other blog and check it out.

I have two hives set up on the far end of the area where we plan on having a small fruit orchard of twelve trees.

On the opposite end is where our raised garden and green house is situated.

The hope is our hives will help pollinate our orchard as well as whatever is growing in the garden.

The install was straightforward. Once again, the hardest part is just getting the dang syrup can out of the package. After that, it is just shake shake shake.

I haven’t named my queens yet and I’m open to suggestions although I’m leaning toward Queen Quarantine as one. I’m excited to have hives again, and I’m looking forward to chronicling their progress in our new home.

Can’t wait to start the hives up again in the new house!

It’s hard to believe it has been 2 years since my last post, but having a child certainly takes up a huge amount of your time.

While I haven’t been posting, I am still very active in the Austin beekeeping community and we have our 6th Annual Beekeeping Seminar approaching in January.

You can register at the following URL: https://aabaseminar2017.eventbrite.com

This is a daylong seminar offering 6 different educational presentations running
concurrently in each time slot throughout the day. This will provide many beginning and advanced subjects to choose from. A separate beginner track has been formatted covering a variety of startup topics for soon to be or very new beekeepers.

It’s been a week since our beekeeping seminar at the Lady Bird Johnson Wildflower center, and I finally have some time to write about it. We sold out our 250 seats we had available and had a waiting list of yearly 100 people wanting to get in. There is clearly an interest for this type of information so we have already started looking for a venue to accommodate at least 400 people for next time. 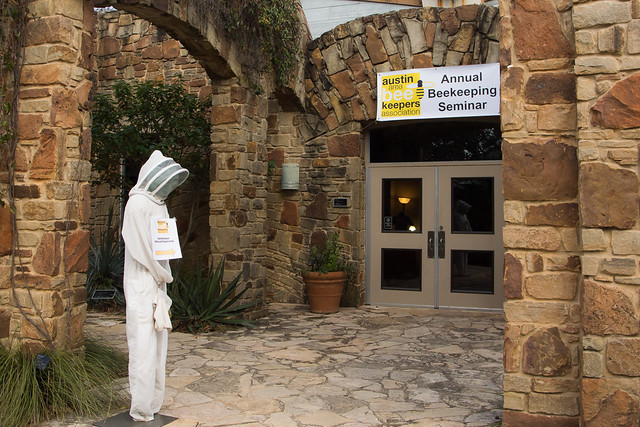 All in all, it went very smoothly and our feedback was very positive. The Beekeeping 101 class was packed. Here is Lily explaining the difference between Langstroth and Top Bar Hives. 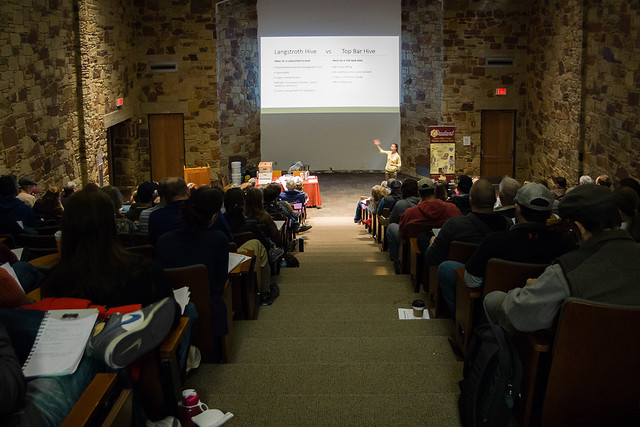 Our more advanced class was also very well attended. Here is Lance explaining a method of combining two weak hives into one using the newspaper method. 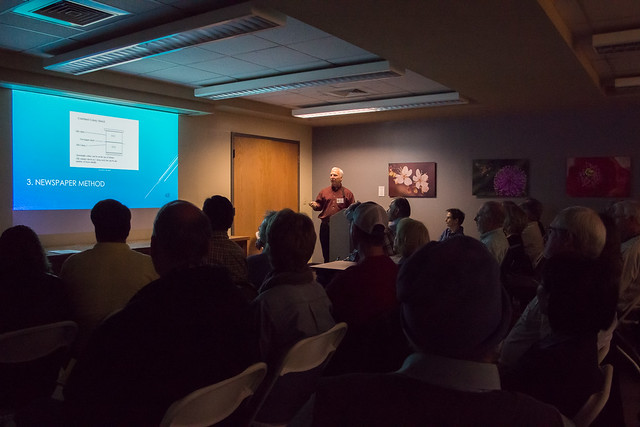 One of the best speakers we had was Dr. Juliana Rangel who is the Assistant Professor of Apiculture in the Department of Entomology at Texas A&M University in College Station, TX. Her research program focuses on the biological and environmental factors that influence the reproductive quality of honey bee queens and drones. 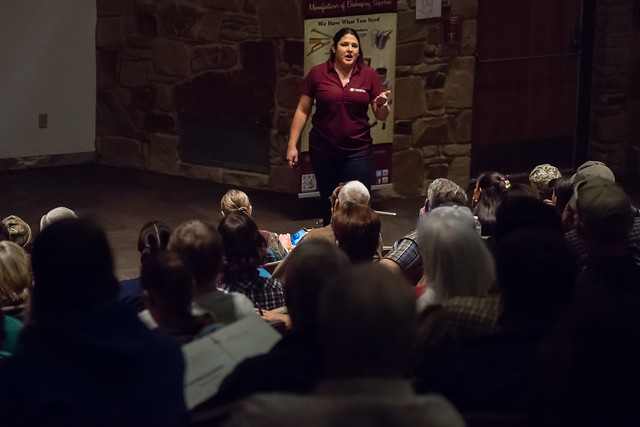 I was fortunate enough to attend both her lectures, and learned a great deal. While I’ve always suspected that the new generation of pesticides are contributing to declining bee health, her research is showing that even sub-lethal exposure to pesticides is causing fertility issues in both the queens and the drones.

I’m very happy how everything turned out. We had a great group of volunteers from the Austin Area Beekeepers Association to keep things running smoothly, and got lucky with some beautiful weather in the middle of January. I’m looking forward to next year, and I count myself lucky to be part of such a great organization.

I can’t believe it has been so long since my last post. One of the things taking up my time (other than a small baby) is helping plan our annual beekeeping class. We’ve greatly expanded the number of classes beyond our traditional Beekeeping 101 course, and I hope that it will continue to grow and become a great annual event for Central Texas Beekeepers. Here’s the scoop:

Why: The mission of this daylong seminar is to educate people of all experience levels in sustainable bee husbandry and to provide funding for The Texas A&M Honey Bee Lab.

This organization is non-profit and all proceeds of this event will be used to promote sustainable beekeeping practices and provide support to our much appreciated Texas A&M Honey Bee Lab. This should be a lot of fun, everyone please come out and see us.

While I haven’t been posting updates on a regular basis, I’m still very active in the Austin Urban Beekeeping Meetup Group. We had an excellent Beekeeping 101 class in January with over 100 people in attendance, and we just had our February meeting this past Monday where we discussed swarm prevention and capturing swarms.

Our Meetup members also requested we start a monthly “What should I be doing now?” column so that new beekeepers have a sense of what they should be seeing or doing with their hives. I ran through this in the meeting, but thought I would also start posting it to my blog as well. So here goes:

He’s keeping us busy so the blog may not be updated as frequently as in the past, but the plan is still to start over in the spring with a new hive and hope for better luck in 2014. We are finally getting rain in the Austin area which I hope will spark an amazing year for wildflowers starting next March. I already see Bluebonnet seedlings starting to emerge from the ground after these rounds of heavy rains so maybe it is a sign of good things to come.

Flat Stanley and the Honey Harvest

Flat Stanley decided to stick around in France and help with the honey harvest. The sunflower honey is so golden, and I bet it tastes amazing.

Howdy – its Flat Stanley again, reporting in after an exciting day’s honey extraction! We collected the honey from the hives of Dallas and Jean-Philippe – three hives in all. I was asked to help out in the Extracting Room.

Firstly we had to make sure that all the equipment was spotlessly clean. It is after all a year since it has been used. You see me here atop the centrifugal extractor, surrounded by uncapping trays, buckets, sieves and honey tanks.

All was fine and dandy, so we installed all these bits and pieces in the so called Extracting Room. When Dallas’ house was used as a farm in the olden days, this room was part of the area where they kept cows and horses. There is a massive vat in the corner which some say was for water for the animals, others say it was for wine making –…

Flat Stanley is certainly enjoying himself as he visits beekeepers from around the world!

Howdy! My name is Flat Stanley, and I come from Austin, Texas – where I live with Karl, having being created by Riya as part of the Flat Stanley Literacy Project.

My dream is to travel the globe and learn about beekeeping in different countries. When I heard I was to visit Dallas, I thought fine, not terribly far (about 200 miles from Austin) and certainly not as historical as London, England or seasidey as the Isle of Wight (England’s smallest county at high tide). However, it turns out that this Dallas is a Person, and I arrived after a stress-free journey in a small farming village in south-west France.

Being something of a connoisseur of fine wines, this is rather a coup (notice how I am already picking up some French vocabulary).

After a short siesta, we went off to have a look at the bees’ foraging…